Lactose intolerance: how can diagnosis help with treatment?

Most people are born with the ability to digest lactose, which is the main carbohydrate in milk. However, a large part of the population loses this ability at some point in their lives. It is estimated that 70% of the world population suffers from lactose intolerance, which is one of the main gastrointestinal problems today.

Lactose is a disaccharide sugar found in mammalian milk, which makes up about 2 to 8% of milk, but this amount can vary among species and individuals.

Lactose is a large sugar molecule made up of two smaller sugar molecules, glucose and galactose. Lactose is first broken down into glucose (used as an energy source) and later into galactose (it becomes a component of glycolipids and glycoproteins) by the lactase enzyme, and then absorbed by intestinal enterocytes into bloodstream. The digestion and absorption of lactose takes place in the small intestine.

What is the role of the lactase enzyme?

The lactase enzyme is encoded by the LCT gene (2q21), and is responsible for the hydrolysis (breaking down), or we can say even for the digestion, of lactose into glucose and galactose. The expression control of the LCT gene is regulated by the MCM6 gene. Some individuals have variants in this gene that maintain the production of intestinal lactase, allowing these individuals to digest milk properly throughout their lives.

If the lactase enzyme is absent (alactasia) or deficient (hypolactasia), unabsorbed lactose molecules draw fluid into the intestinal lumen, leading to an increase in volume and fluidity of the intestinal contents.

In addition, unabsorbed lactose passes into the colon, where it is fermented by bacteria that produce short-chain fatty acids and gases, possibly causing various gastrointestinal symptoms.

Did you know that lactase starts to be produced during pregnancy?

Lactase activity can be detected on the surface of the intestinal mucosa from the eighth week of gestation, peaking at the 34th week. However, from the first month of life, lactase activity starts to decline (lactase is not persistent), and its decline is highly variable from weaning to undetectable levels as a normal consequence of down-regulation of lactase activity.

In humans, about 30% of the population has continuous lactase activity after weaning in adulthood, thus enabling the consumption of large amounts of lactose.

What is lactose intolerance?

It is a gastrointestinal condition characterized by the individual’s inability to digest lactose, the sugar present in milk and dairy products, usually caused by a deficiency of the enzyme lactase.

Hypolactasia or lactase deficiency, is the “failure” to express the lactase enzyme in the small intestine; which results in a condition that determines lactose malabsorption, that usually occurs after 6 to 7 years of age, and also occurs much later, showing a steady increase in the prevalence of this condition, even in the age groups above 65 years old.

The process of reduction and the amount of residual lactase have considerable variability between different ethnic groups and even among individuals. However, 50% of the lactase enzyme is sufficient to ensure effective lactose digestion.

Understand the types of Lactose Intolerance:

Lactose malabsorption refers to any cause of failure to digest and/or absorb lactose in the small intestine and is a necessary precondition for lactose intolerance. However, the two should not be confused, as many individuals with malabsorption have no symptoms after ingesting dairy products.

Symptoms, as well as their severity, can vary among individuals, depending on the amount of lactose ingested and the individual’s ability to digest it. The onset of these symptoms is strongly related to the appearance of hydrogen gas during breath tests. The most common intestinal symptoms include:

Some studies have reported that the clinical presentation of lactose intolerance is not restricted to intestinal symptoms. Neurological symptoms or cardiac arrhythmia may occur in about 20% of individuals.

One of the possible factors responsible for these systemic symptoms may be the production of toxic metabolites, generated by the fermentation of lactose in colonic bacteria, which can alter the cell signaling mechanism.

When there is the presence of systemic complaints, it is important to exclude cow’s milk protein allergy, which occurs in up to 20% of patients with symptoms of lactose intolerance.

Difference between allergy and Lactose Intolerance

Gastrointestinal symptoms of intolerance can be similar to cow’s milk allergy and can be misjudged as “milk allergy” symptoms, leading to misdiagnosis and poor dietary management. The treatment of lactose intolerance involves the reduction, but not the complete elimination, of foods containing lactose. On the other hand, individuals with suspected milk protein allergy should undergo a restricted diet test with elimination of cow’s milk protein-based foods.

There are important differences between lactose intolerance and milk allergy, so a better understanding of these differences could limit misunderstandings in the diagnostic approach and management of these conditions.

Some tests can be performed to diagnose lactose intolerance, the most common being the following:

The main limitation of genetic, enzymatic, and gaxilose testing is that malabsorption is common in healthy individuals, and a positive test does not confirm whether symptoms are caused by this condition. Breath testing is generally the method of choice, as reasonably reliable information is obtained about the patient’s digestive function and symptoms. 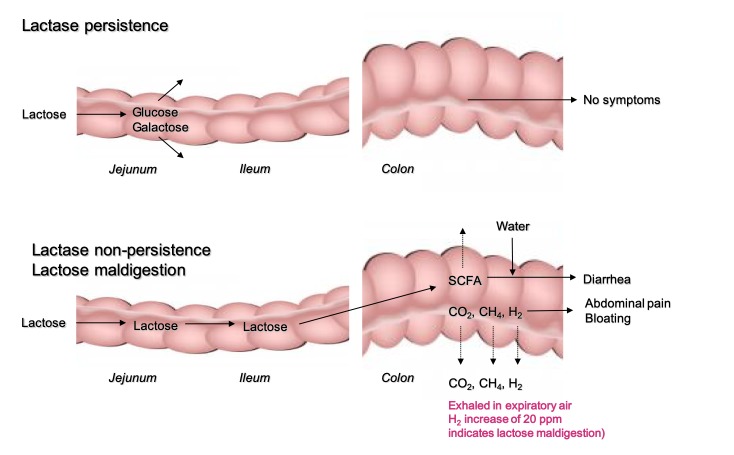 What exams does SYNLAB offer for lactose intolerance?

Lactose Test, which consists of the genetic analysis of the patient’s DNA to determine the presence of the main variants (-13910C/T and -22018G/A) in the MCM6 gene, associated with the development of lactose intolerance in adulthood.

The exam is performed using the Sanger sequencing technique, which consists of determining the exact sequence in which the nucleotides are found in the MCM6 gene for the studied variants.

The Lactose Test is indicated in:

INTOLERANCE2, an exam that allows you to know in a single analysis if there is a genetic predisposition to celiac disease and/or primary lactose intolerance. As an alternative to breath testing, the analysis is performed from a blood sample, avoiding direct patient exposure to substances.

In addition to the hydrogen breath test for the detection of lactose intolerance, through gas chromatography analysis.

The treatment of lactose intolerance aims to improve patient’s symptoms and avoid the risk of long-term malnutrition. A low lactose diet is usually recommended.

However, if lactose intolerance is present or diagnostic investigations are inconclusive, a detailed diet along with a history of symptoms should be undertaken and, if appropriate, foods containing lactose may be excluded from the diet until symptoms improve, usually for at least four weeks.

About the SYNLAB Group

Gestational complications resulting from thrombophilia account for about 75% of the causes of neonatal morbidity and mortality.

The importance of the genetic profile for the pharmacological treatment of anxiety disorder.

Omega 3: Taking care of your cardiovascular and brain health

How genetic tests work for the predisposition of gynecological cancer